In recent years, the application cases of industrial robots in China have increased rapidly, mainly in welding, spraying, handling and other fields,

and there are not many applications in bending. Workpiece bending is a kind of work which is widely used and has certain danger, so the market prospect

of robot bending is very optimistic, and there are many successful experiences abroad. At present, 40% – 50% of the bending machines in sheet metal processing

workshops in Europe and America are equipped with robot automatic bending system, while the bending automation in China is just in its infancy.

In the next 10 years, the domestic demand of bending robot will rise in a straight line.

The CNC plate bending flexible machining unit with robot as the core executive part is a set of highly automatic equipment combination,

which has the advantages of high efficiency, high quality and high flexibility. In the bending flexible machining unit, choosing the appropriate component

combination can provide better support for improving the machining efficiency and flexibility. The bending accuracy depends on the accuracy of the

The difficulty of the cooperative control lies in the speed matching between the robot and the bending machine, as well as the running track

of the robot supporting the workpiece. The poor follow-up effect will seriously affect the forming effect of the bending angle and the plate. 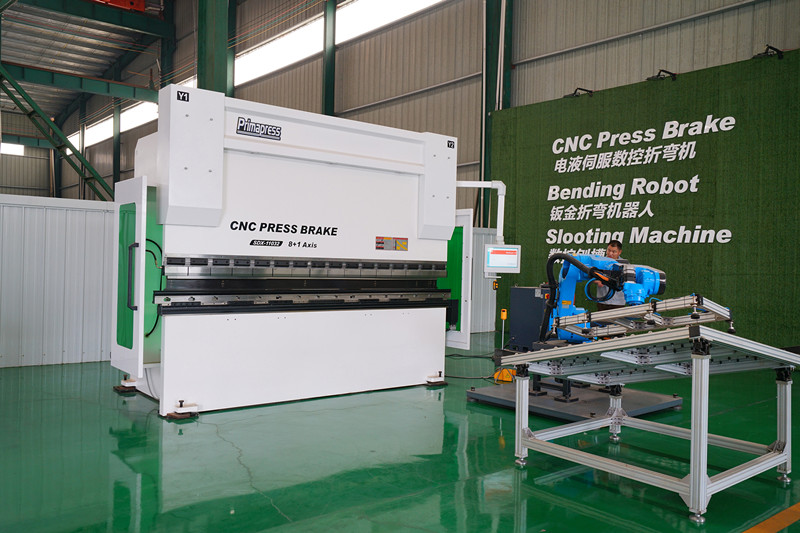 The quasi bending processing unit (Figure 1) takes the robot and bending machine as the core, and the gripper, loading platform, blanking platform,

The grab is a robot’s “hand” instead of manual work. The gripper of bending robot is generally composed of several suction cups installed on a metal frame. Loading platform and unloading platform usually adopt palletizing pallet, and conveyor belt or roller table are also used to transport raw materials and finished products. Oily plates are easy to be adhered, which leads to picking up multiple plates at a time. A separation device (such as magnetic separator) and a detection sensor can be installed beside the feeding table to ensure that the plates to be grabbed are single sheets. The positioning table is an inclined platform with a baffle, on which there are micro raised balls. The robot transfers the steel plate to the positioning platform, and the plate slides freely to the retaining edge under the gravity. Because the position and the edge of the positioning table are fixed, when the robot grabs the plate again, the position of the plate and the grab is relatively accurate and fixed, which provides a reference for the next bending. The tripod is a fixed frame of the grabbing device. When the robot needs to take the workpiece at a different position, it can put the workpiece on the turnover frame to fix it, and then the robot can grasp the workpiece at a new position again. In some special occasions, it is also possible to use the bending machine mould to clamp the workpiece and change the grab position.

The work of bending processing unit is mainly divided into six processes: feeding, reclaiming, centering, turning, bending and stacking, as shown in Figure 2. 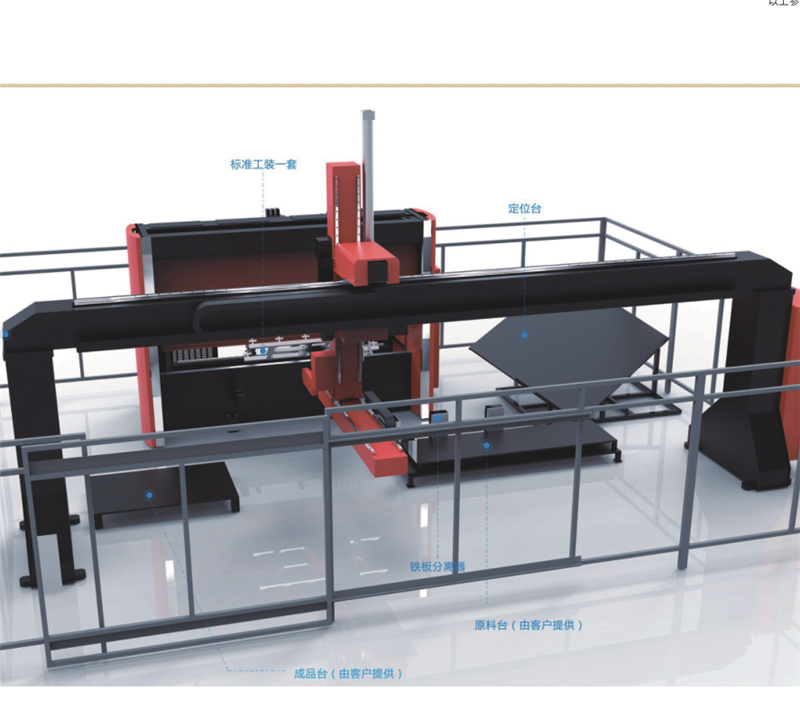 2. Take out materials. The robot runs to the position of the loading platform, and detects the height of the plate through the ultrasonic sensor installed on the grab. According to the detection data, it automatically runs to the appropriate position to grab the plate. After grabbing the plate, it measures the thickness of the plate through the thickness measuring device, so as to avoid grabbing multiple plates at one time, resulting in processing failure. After passing the thickness measurement, it is ready for centering.

At present, in the market, whether it is a general standard six axis robot, or a special bending robot whose arm span or body is optimized for bending process, it needs the support of bending following algorithm, and there are few cases that do not follow bending. If there is no good follow effect, the gripper or suction cup grab will pull the workpiece due to poor follow track, forming sheet wrinkles and affecting the forming quality. It is helpful to establish a good tracking algorithm and obtain excellent tracking effect by establishing an accurate bending following motion model of robot. Fig. 6 is a schematic diagram of bending process, from which a mathematical model of bending following is obtained, as shown in Fig. 7.
The parameters in Figure 7 are as follows:
1) r arc radius of upper die: R, unit: mm;
2) r arc radius of lower die: R, unit: mm;
3) lower die opening: V, unit: mm;
4) angle of lower die: ∠ B, unit: °;
5) workpiece thickness: T, unit: mm;
6) thickness from neutral layer to upper surface of workpiece: λ, unit: mm;
7) bending angle of workpiece: ∠ a, unit: °;
8) downward movement of the bending machine slider from the clamping point: s, unit: mm. According to the mathematical model, calculate the relationship between the bending angle and the bending downward amount:   according to the mechanical parameters in Table 1, the comprehensive formula of the relationship between the bending angle and the bending downward amount can get the track curve of the displacement change of the bending angle from 180 ° to 10 °, in X direction and Z direction, as shown in Figure 8. 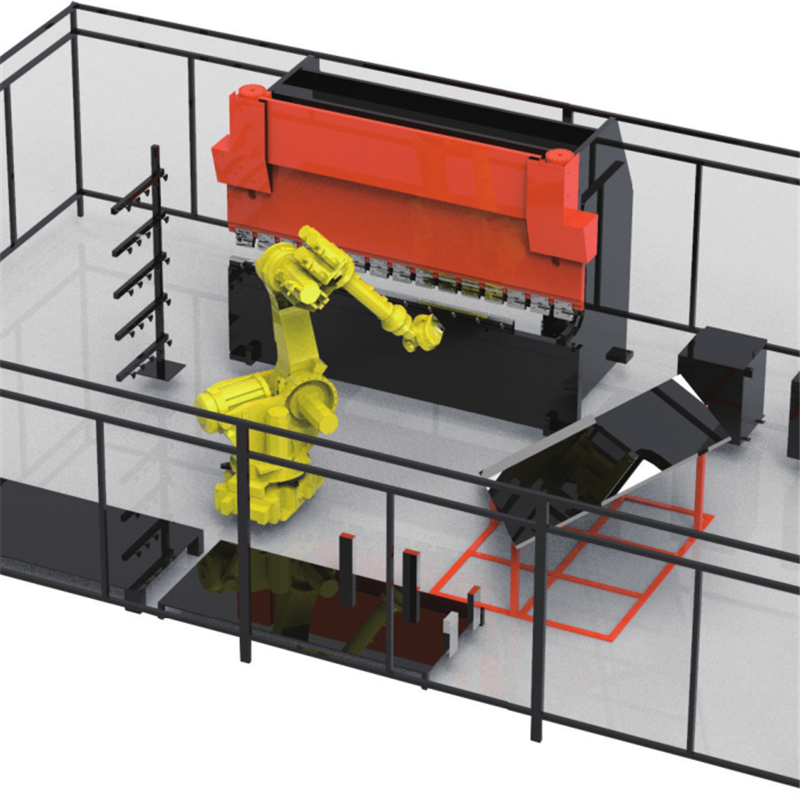 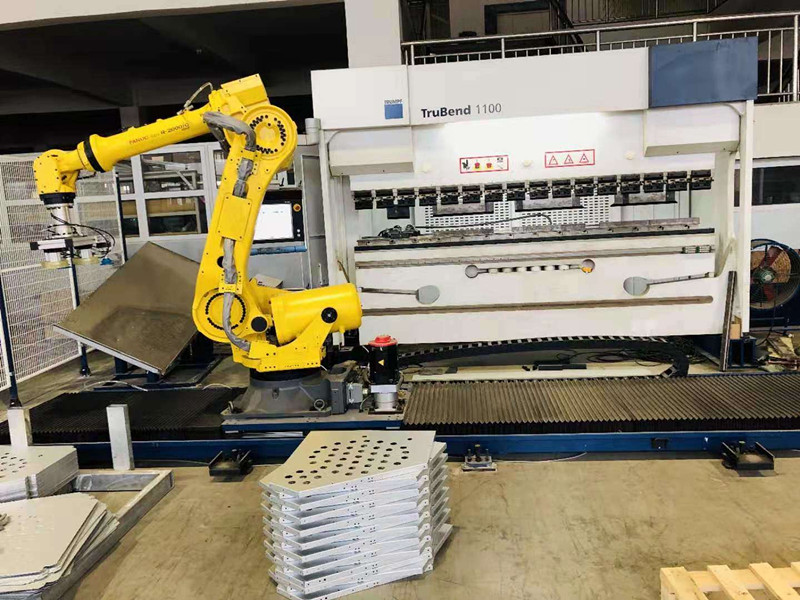